1-513-874-7326
Which magnet is the most attractive for your project?  An in-depth look at the changes to Shipping and Freight during a pandemic  A portable pouch that will help save a life  Hopes Raised as Ship Freed from Suez Canal  How anyone can help to ‘stop the bleed’ and save lives   Load Cells help Amazon unveil its first till-free grocery store in the UK  Discover the Reasons Behind Rare Earth Price Increases  New anti-terrorism legislation will ensure venues are better prepared  Together in Electric Dreams - Jaguar and Land Rover brands have vowed to become all-electric by 2025  Unmasking The Myths Around Face Coverings
Home > News > Discover the Reasons Behind Rare Earth Price Increases

Going back to the 1950’s, the availability of ferrite magnets started an amazing development in the world of motors for almost anything that required motion. It was ferrite magnets that enabled your vehicle’s window wipers to operate without you needing to be twisting your wrist back and forth to a cramp.

Fast forward to the late 1970’s and through the 1980’s, a new magnetic material based on the alloy, Neodymium, Iron, Boron (NdFeB) entered the market following separate developments by divisions of General Motors and Sumitomo. Now your windshield wiper motor was a third of its original size, and very small motors were able to be placed in doors for window lifts, antenna lifts, hood and trunk locks, cell phones, laptops and other consumables. Both companies held patents on their method of producing the alloy and also on the composition of the materials.

Although called a rare earth, Nd is by no means rare and is found in soils in many places. However, it requires surface mining, not in any way favored by the Environmental Protection Agency (EPA) or people who might live close to a mining facility. Partly for this reason, GM closed their only manufacturing plant in Indiana and a Chinese based company took up the licenses from both the original developers.

At this point practically the only country in the world that NdFeB magnets are produced is the People’s Republic of China. They are the world’s top producer of rare earths, which means the United States relies heavily on them for supplies.

Our dependence on Neodymium magnets in everyday life has largely been taken for granted by the general public despite much media coverage. In the 21st century, we have seen the effect of this monopoly on both price and availability; sometimes claimed to be the closure of refiners while they install better environmental equipment. Last December, shipments of rare earth magnets from China to the U.S. reached 585 tonnes, which is the highest amount since 2016, according to Chinese customs data.

Due to increased demand from the electric vehicle industry, ‘vicious competition’ means China’s rare earth materials ‘are being undersold domestically’ according to the country’s Industry Minister.

With increasing numbers of car manufacturers vowing to be emission-free over the next decade, prices for some rare earth materials, including Praseodymium-Neodymium (PrNd) which is used in rare earth magnets, have reached multi-year highs in 2021.

To take control of the rare earth materials being undersold, the Industry Minister proposed that regulation of the rare earth sector should be tightened, which would include a requirement that importers and exporters follow foreign trade and export control laws.

Given this new approach, the main elements that comprise today’s rare earth magnets have skyrocketed in cost and continue an upward trend.

You’ll see from the graphs for the three elements: Praseodymium-Neodymium (PrNd), Ferro-Dysprosium (FeDy) and Terbium (Tb) how this is illustrated. 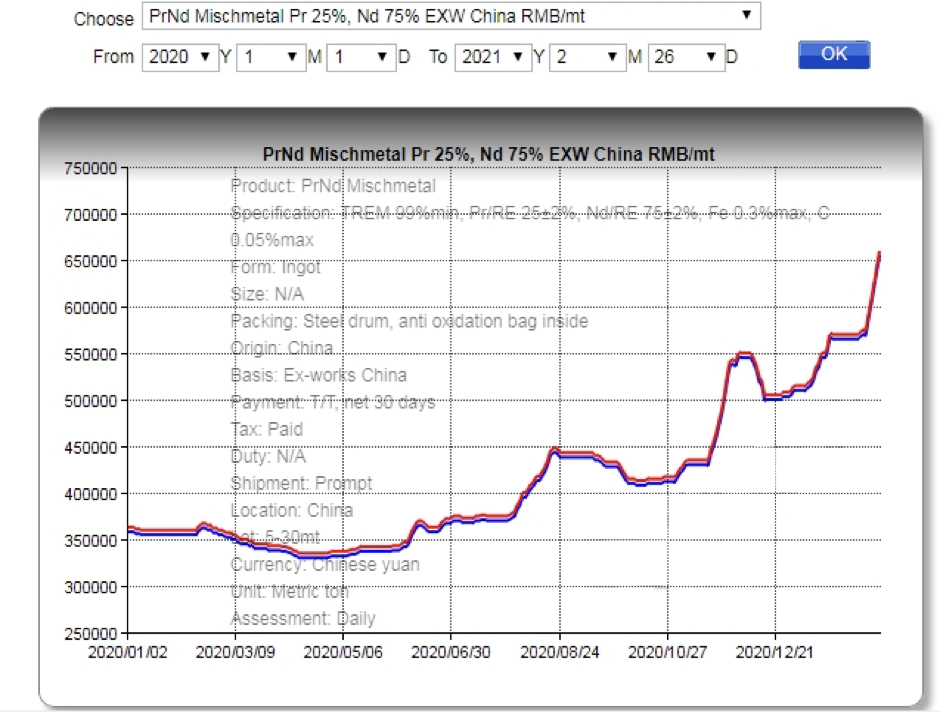 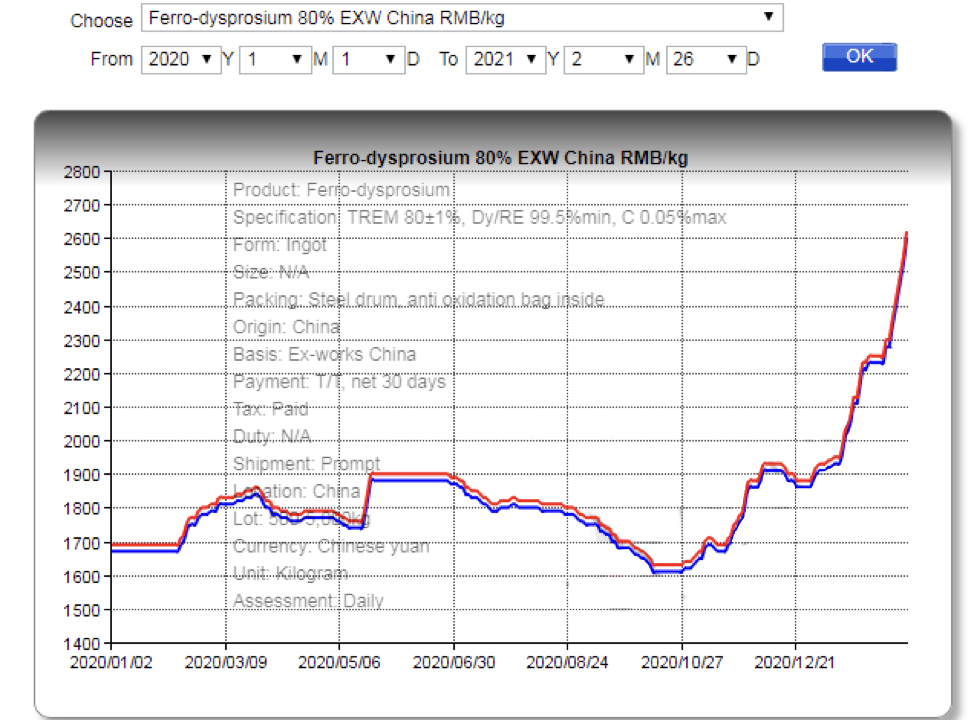 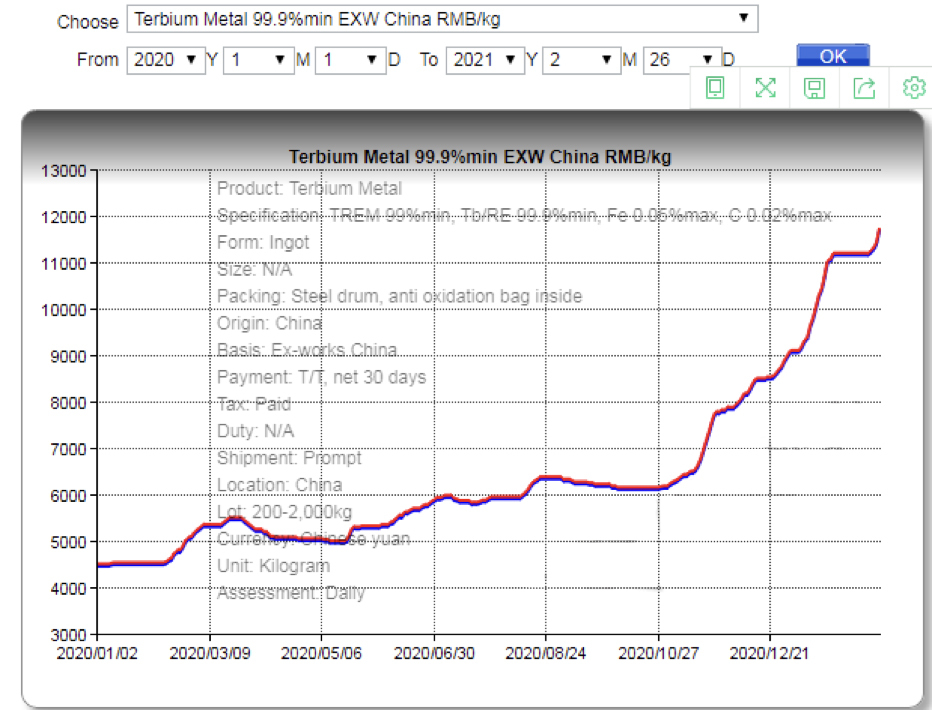 As a result, rare earth magnet producers are only holding pricing for 5 days maximum. We believe that our customers for products that include rare earth magnets may not be aware of this information. We do not wish you to be surprised when you place your next order and we respectfully suggest that you look closely at your requirements for the next few weeks to lock in pricing to your best advantage.

Should you wish to have an updated price for your product, please don’t hesitate to contact Jennifer@tytekgroup.com who will be pleased to arrange it. However, please remember that this will only be valid for 5 days.

As we always do with our customers, we will keep you appraised of developments as they occur.

TyTek Industries has over 30 years of experience and expertise in the magnet industry, including rare earth magnets, and we can supply prototypes right through to full-scale production with a trusted source.